Despite a growing order book and delighted customers, the cumbersome internal processes at Hesus meant the company was struggling to expand. The Scalers hand-picked a 3-person development team to digitise processes, and enable Hesus to become more efficient, versatile, and profitable.

When a company needs work done with soil, they call Hesus. They are a leading innovator in soil management, providing logistical solutions for construction sites of all types, shapes, and sizes. Paris – London – Bangalore, 50 employees

“The Scalers are entrepreneurs who really understood how we could achieve our digital transformation. Our development team in Bangalore has been transformative for my business.” 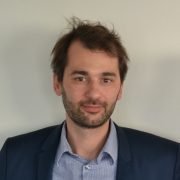 Soon after opening their doors, Hesus developed a strong reputation within its field, and their services were hugely in demand. Naturally, CEO Emmanuel Cazeneuve leveraged this reputation to expand and hit international markets. Their services were the best in the business.

And they still struggled.

The Hesus business model was incredibly labour intensive: a construction site calls Hesus about a job, and Hesus then sources the companies and vehicles, organises the logistics, and delivers a comprehensive – and valuable – service to the construction site.

Can you imagine orchestrating this kind of operation, over the phone, across dozens of projects, in several countries? That’s exactly where Emmanuel found himself, just when his business should have been more successful than ever.

Hesus had to align itself with modern digital technology, to create processes which could be automated and streamlined, and to break away from old-fashioned practices.

The company CEO, being acutely aware of their technological issues, conceived a solution: Hesus Store. This software platform would handle billing and logistics, as well as automatically connecting construction sites through advanced matching algorithms.

In layman’s terms, it would fire their business into the digital age, and give them the tools they needed to sustain growth, meet increasing demand, and still deliver their premium service.

Hesus turned to a local Parisian development team for help, but they couldn’t find software engineers to engage with the project. Next they tried a major design agency – same problem.

Hesus first looked to hire in-house developers in Paris, but no engineers showed interest in the construction sector. Next, Emmanuel tried outsourcing his product development to a software agency, but for them, Hesus was just another number.

Emmanuel was looking to technology as a strategic pillar, to shape the future of his business, and the traditional methods of hiring talent weren’t working. Emmanuel Cazeneuve realised he needed like-minded entrepreneurs who could understand his business, and vision, and build a tailored team to make it happen.

He needed The Scalers.

A Fast, Effective Solution
from The Scalers

After a quick conversation with Emmanuel, we knew exactly what Hesus needed: the ability to deploy a highly skilled, self-standing software development team. We were perfectly placed to deliver.

We flew to Paris, and held productive talks with all the major shareholders. By the end, we understood Hesus’ vision and their goals for Hesus Store. We created a comprehensive plan of action, established key goals, and set out the main priorities.

The offshore team would consist of three software engineering specialists: a technical lead, plus one backend and one frontend developer. By implementing a Scrum methodology, we could ensure that the highest priority tasks would always be delivered on-time.

We carefully selected the 3 developers, being sure to create a well-balanced team with complementary skill sets. A Product Owner was appointed in Paris, and we established communication channels between him and the development team in Bangalore.

The team, handpicked and prepared with an exact image of Hesus’ ambitions, set to work.

One year later, the product was ready for launch.

The Offshore Team has
an Immediate Impact on Revenue

After launching Hesus Store, the company received an immediate boost: 6-figure annual contracts from two of the world’s largest construction companies. Safe to say, they hit the ground running!

The increase in operational efficiency within Hesus was startling, and the company is now expanding at the rate it deserves. In fact, they are planning to grow the offshore development team to deliver even more significant changes.

As a direct result of the product built by the offshore team in Bangalore, Hesus has transformed from pen, paper and manic phone calls, to an innovative, digital-first business.

The future is bright for Hesus!